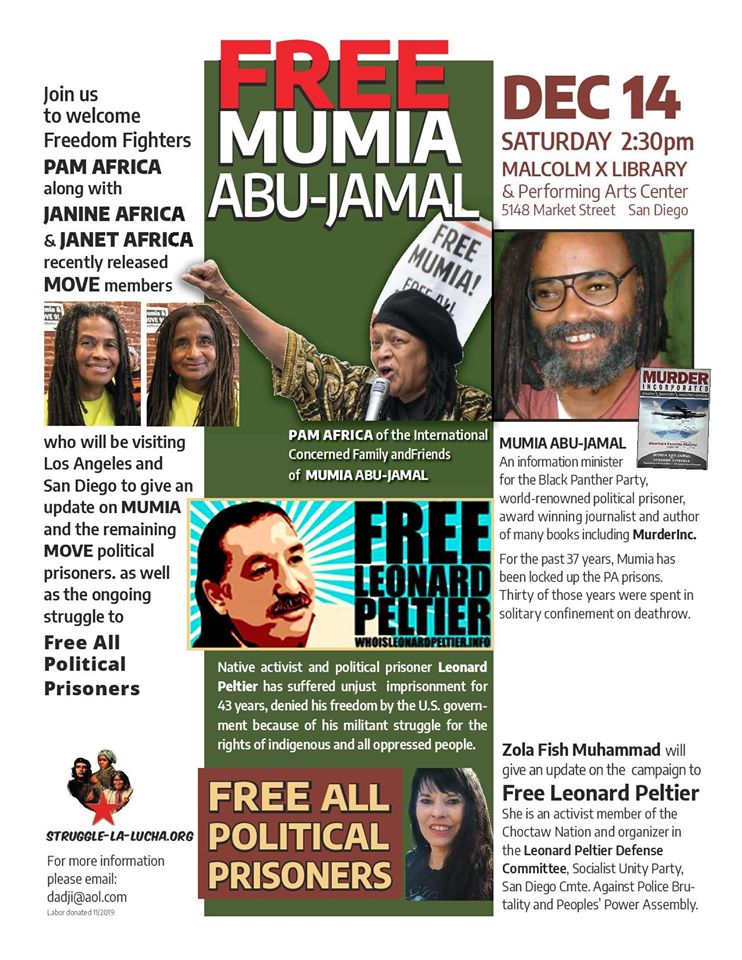 Join us for this rare opportunity to hear first-hand from Janine Africa and Janet Africa, two members of the MOVE 9, incarcerated for over 40 years. Also, hear from Pam Africa, long-time leader of the International Concerned Family and Friends of Mumia Abu-Jamal.

The MOVE 9 members were jailed after a siege by police in 1978. In a second police attack in 1985 their Philadelphia headquarters was firebombed, killing six adults and five children, and burning an entire city block. Two MOVE members died in prison, two were released in 2018 and three were released in 2019 after forty years. Two more remain imprisoned.

Famed political prisoner, former Black Panther and journalist Mumia Abu-Jamal has made the case of the MOVE 9 his mission, even as his own life was in peril while on death row. Mumia’s death sentence was overturned and he was moved from death row, but the racists running the prison-industrial complex have since tried to murder him through medical neglect. It is through determined struggle carried out by the activists in International Concerned Family and Friends of Mumia Abu-Jamal with Pam Africa in the forefront that gains have been made in the cases of the MOVE 9 and Mumia Abu-Jamal.

Pam. Janine, and Janet will be featured speakers at a ‘Free Political Prisoners’ Public Forum in San Diego on Saturday, December 14 at Malcolm X Library and Performing Arts Center and Sunday, December 15th at the Harriet Tubman Center for Social Justice.

The Move members will share with the community their experiences before, during,life after release, and the continuing fight to free the two remaining Move 9 Members, Delbert Africa and Chuck Africa.

Pam Africa will give an update on Mumia Abu Jamal and the ongoing struggle to Free all Political Prisoners.

Both Forums will emphasize the importance and necessity of supporting existing and former Political Prisoners like Janine and Janet African. They come all the way from Philadelphia, Pa. and choose to speak with us on their first visit to the west coast. Let us show these sisters some Love by helping them to recover some of their expenses and to ease some of the hardships as they adjust to life and struggle out on the streets along with us.

No one will be turned away for lack of funds.